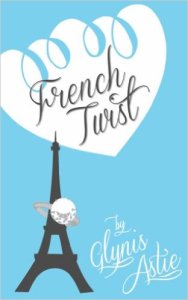 Sydney Bennett had spent her life in pursuit of perfection. She planned, weighed her options and made careful choices based on calculated outcomes. Through all of her efforts, she had come pretty close to perfection, if she didn’t say so herself. She had fled the cold winters in New York for sunny California, found a job that she loved and lived in the same town as her sister, and best friend, Kate. The one area of perfection that had always eluded her was her love life. No matter how hard she tried, she always ended up with a broken heart. After a particularly traumatic breakup, Sydney vowed that she was done with love.

Just as Sydney threw herself into her new plan to forget about men, a handsome Frenchman tossed all of her intentions out the window as he swept her off of her feet. Louis Durand had lived a life filled with excitement and adventure. He was impetuous, intelligent and incredibly charming. So naturally, he scared Sydney half to death. From the moment they met, Louis and Sydney’s romance progressed at warp speed. Sydney did her best not to run, but her deep rooted relationship anxiety threatened to provide an easy exit. When Louis mentioned marriage before Sydney even knew his favorite color, she was more than tempted to reach for her running shoes. Will she be able to put her fears aside to follow her heart? The one thing that Sydney will learn is that sometimes perfection comes with a twist…

This is a definitely a TOP NOTCH CHICK LIT novel! Glynis Astie introduces us to Sydney Bennett. I fell in love with this character. She is 27 years old, working hard, and very close to her sister, Kate. I loved knowing that this story is based on Glynis’ love story with her French husband. Knowing that it really worked out, was super cool!

At the beginning of the book, Sydney is giving up on love because her last boyfriend left with a broken heart. Then she meets, Louis Durand and everything changes. Their romance was coming to life super-fast, and it was so much fun to read about. They are going a little too fast for Sydney’s liking. But, I think their love had a life of its own.

Sydney’s life is going well in all areas but her love life. Will Louis change that?

I cannot wait to read the second book in this series, “French Toast”

Be Sure to check out my interview with Glynis Astie, posted this past Friday! She is too fun!

Chelsea Wyatt, a single mom trying to build a life for her and her son, is sick of the body she sees in the mirror. A daily diet of Cookie Crisp cereal is not doing wonders for her mood or her figure, and it’s time for a change. Setting out to get fit, she commits herself to a daily walking plan, forcing herself to give up her all-sugar and carb diet, a difficult task at her donut obsessed job.

But her plan goes sideways when a stumble on the ice puts her in the arms of Jay, an attractive young man out on a run. They grab coffee together, and Chelsea finds herself thinking about him long after their short meeting. The thought of dating again hadn’t crossed her mind in years, and she doesn’t even know if Jay is available, or if he would be interested in her despite her unfit body.

Just when she has a handle on her new routine, her past catches up with her, throwing her blossoming relationship with Jay and the rest of her life into chaos. Can Chelsea hold onto the people she loves most, or will a wrong turn set her up for failure?

This is book 2 of the Pastime Pursuits series, and can be read as a stand-alone novel.

I recently read/reviewed Tracy Krimmer’s novel, “Caching In”. So, I was very excited to be able to move on quickly to the next story in her “Pastime Pursuits” Series. I am sure you will feel the same way.

In “Caching In”, we are introduced to Chelsea Wyatt. She is not the most likable character, as she was dating a man in another relationship…and, she was the other woman. But, I LOVED HER! She was very real. In “Caching In”, we find out that Chelsea is pregnant.  Although, “Jay Walking” could definitely be a standalone novel.

This story is all about Chelsea. She is raising her son James on her own. When the story begins, Chelsea decides that she is not happy with her body, and she is going to walk off the pounds.

While out for a walk, she literally falls in to the arms of Jay. Hence the wonderfully appropriate name for this novel. (I love Tracy’s covers and titles)

Jay is a doctor and has a ton of awesome qualities, so it was hard for Chelsea not to fall for him. But, is there even the possibility of a relationship there?

Can a compass lead you to love?

Broken-hearted Ally Couper has had enough with her ridiculous life. Her job at the bank is going nowhere, and her love life might as well be non-existent.

Determined to try something new, Ally becomes absorbed in the world of geocaching. The high-tech driven scavenger hunt introduces her to Seth, and she realizes the game isn’t the only thrilling part.

Ally’s bad luck may finally be changing, until the past threatens to halt her future with Seth. Can they find happiness together, or is love the one cache Ally can’t find?

You gotta love a book that makes you investigate a new hobby! Geocaching is something I knew my brother had enjoyed. After finishing this book, I had to ask my brother about his Geocaching experience and he said, “Yes it was fun, was a great reason to go walk around state parks and not just walk but have an adventure while walking.” Geocaching is like a treasure hunt…People leave “caches” in various locations (like parks) , and you are to go and “hunt” for it.

Tracy Krimmer writes a truly delightful story. It was a fun read, the kind you look forward to getting back to when you have to step away.

We meet Ally Couper (not to be confused with Ally McBeal..lol). She and her fiancé had broken up 8 months ago due to his philandering ways. She had what seemed like a dead end job as a Bank Teller, and was just going through the motions of life. Until she goes on her first Geocaching hunt, and meets Seth.  She is immediately attracted to him….they go out on a first date…which may be their last.

I fell in love with her best friend, Chelsea.  I am sure a lot of people don’t care much for her, as she is dating a man that already has a girlfriend..so, she is the “other woman”. She was in this relationship for about two years.  Ally hated that she was dating him. It had to be hard on her, being that her fiancé was found cheating on her.

I did have a hard time wrapping my head around their friendship, as it seemed to be fueled with a lot of resentment..but I realized by the end of the book, that most friendships go through these stages.

This story had a lot of intriguing story lines, and I was immersed in it from page one.

If you want a fun, quick witted, chick lit read… This is a Must!!

I am already reading book two in this series, “Jay Walking”…and loving it!

I am so happy I met Tracy Krimmer along the way….Her books are a delight!

Becky Monson delivers a delightful chick lit novel.  “Speak Now: or Forever Hold Your Peace” was definitely fun to read, and I am sure I would enjoy her other books.  (going to add them to my Good Reads to-read shelf right after I post this review)

I was in love with the main character, Bridgette Reynolds!  I would have been friends with her.  I love a book where you feel that much for a character.  It takes a great writer for you to make that connection.

This story began at a runners pace, and took you right into the sheer madness of Bridgette’s love life.  I was laughing out loud within the first few pages.  And, this pace lasted throughout the entire book.  I would have been happier if the ending was a bit longer, I wanted to revel in it a bit.

The array of characters in this story are marvelous…Bridgette’s best friends, Ashley and Justin are a wonderful addition to the drama that unfolds in Bridgette’s life.  To quote Becky Monson. “I do love that even if she hates my choices, Ashley has my back. That is a true best friend right there”.  This book is about friendship just as much as it is about Bridgette’s love life…or lack thereof.

Bridgette’s love interests, Adam and Ian are the ideal relationships to give this story a great back bone.  I bet a lot of us have “the one that got away” story…

Even Adam’s mother, Carla is hysterical. She really is awesome!!  If you have ever broken up with someone and felt the loss of losing their family, as well…this book will really hit home for you.

I need to add:  Bridgette’s grandmother’s (Gram’s) and her Bridge Club needs their own book.  Her Grams was so hysterical, and perfect.  She reminded me of my grandmother, only instead of watching “Young and the Restless” together, we watched “Jeopardy” and “Wheel of Fortune”.  My grandmother was also in her 80’s and just as funny, and spry!  Everything that involved Grams always made me smile.

This book was very reminiscent of Helen Fielding’s, “Bridget Jones’s Diary”…so much, that I can see this as a movie.  I would really like to know what these characters look like. 🙂  I imagine Ryan Gosling playing Ian….ok, yes, that did make this book even better!!!

You can grab the book here:

Calling all Chick Lit Lovers!! This is the perfect book for you!! Bridezilla at its finest! Pretty names and prettier people! Fashion, Fun, Fights…this book has it all. A true women’s story!

It is hard not to enjoy this romp through a year of planning the most elaborate wedding that this small New Hampshire town has ever seen. The Van Guilder/Sinclair/Worthington wedding has to be big, and it has to be picture perfect. One good enough to be on television!

Samantha March hits the nail on the head with the story of Emerson planning her big day, and all the things that can go wrong….or, right. This is a year of self-discovery for the Bride-to-be, and it is a very endearing read. No stone goes unturned regarding all of Emerson’s relationships. Emerson’s relationship with her Grandmother was so touching, that you felt their love so strongly throughout the book. That really touched a place in my heart. It was just beautiful.

In trying to create this perfect wedding, Emerson seems to be losing a bit of her true self….and begs the question…Is it really worth all of this fuss?

I highly recommend that you check this book out, and find out if Emerson comes out of her wedding preparations a happily married Mrs. Logan Worthington?