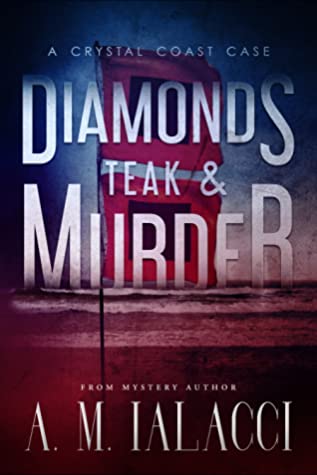 When Allie Fox became a private investigator, she envisioned herself solving crimes and keeping her hometown of Carteret County a safe place. Instead, to her great regret, she’s found herself trailing cheating husbands and tracking check kiters. All that changes when her autistic brother, Ryan, discovers a body near the Cape Lookout Lighthouse. Now, Allie is diving headfirst into the investigation.

Everyone in town loved the victim, or so they’re saying. Yet Allie soon discovers many at the Cape have shocking secrets they would kill to keep hidden. As she closes in on the truth, a frightening attempt is made on her life. Can she unravel the clues to reveal the murderer’s identity before becoming their next victim?

I was absolutely intrigued by “Lenses, Lust & Murder”!! A.M. Ialacci drew a stunning landscape right from the start. The trip climbing up the lighthouse and its view were breathtaking!! Too bad there was a dead body at the end of it!!

Then the island was so fired up with excitement as the ferry came in with the FBI Agents, and the local agents arrived to both work with Allie Fox and bring a special “something” for Allie’s brother!

A genius Set-Up! Intense! This was a story I knew I was going to dig my teeth into!

The novel sustained its intensity right through to the very last alarming twist!

A.M. Ialacci is a force to be reckoned with in the Mystery Genre. I hope there are a lot more stories with Allie as our female sleuth!

I received a copy of this book from the author in exchange for fair and honest review.

Upon the sudden deaths of her parents in a car accident, credit fraud investigator Allie Fox traded her fast-paced life in Chicago for a boatyard bookkeeping job in sleepy Carteret County, North Carolina. It is a huge transition, especially as she is now the sole caregiver for her younger autistic brother. But when the yard foreman mysteriously ends up dead at work, she can’t resist being pulled into the mystery.

Plenty of people had reason to want Ty Guthrie dead, but he had been kind to her as a kid, and even the sheriff’s department thinks there may have been foul play. Despite the possibility of alienating all of her co-workers and risking her livelihood, Allie becomes a consultant on the case to discover the murderer in their midst.

The deeper she digs, the more secrets she unravels, and the killer turns his sights on her, and even worse, her brother. At odds with law enforcement and the DA while a massive hurricane bears down on the coast, the only thing that matters is that her brother is in danger. With everything to lose and time running out, it’s up to Allie alone to stop the killer, or die trying.

This is a second impressive murder mystery written by A.M. Ialacci!

I loved being introduced to another one of her protagonists!  A.M. Ialacci truly gets you invested!  It was fun to be back  after reading her first book, “Sight in the Dark”.

Allie Fox was just as unstoppable at finding answers, as I was in finishing her story!

I was so wrapped up in her livelihood, and that of her brother; that I had to know what the outcome was going to be…and….What a surprise it was!!

I received a copy of this book from the author in exchange for fair and honest review.