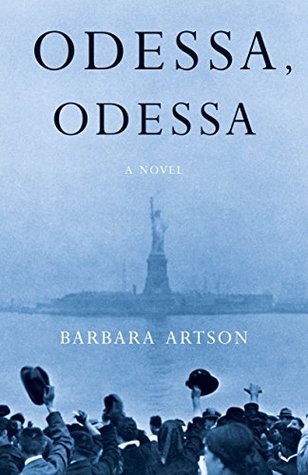 Q: What first sparked your interest in writing “Odessa, Odessa”?

Oh my! That goes back some 40 years when I was a graduate student in English Literature at San Francisco State University pursuing an academic degree.  My concentration was the 19th century novel, particularly, Charles Dickens.  I was drawn to his compassion for the underdog, the overlooked, the underprivileged. For my final project, I elected to complete Dickens’s last and unfinished novel, The Mystery of Edwin Drood. While writing that paper, I had an experience that felt somewhat akin to magic where I felt I was not the one in charge of the writing — that the characters were dictating their dialogue and advancing the narrative. Now, I’m not a “woo-woo” kind of person and I understand that I had so deeply steeped myself into Dickens’s characters and his style of writing, that my psyche took over the process of writing.

I attained my Master’s degree and was on my way to a doctoral program at U.C. – Berkeley when, because of a divorce, my personal life fell apart.  With two young children to raise, I knew that I couldn’t spend the next seven years (the average time to complete a doctorate in English Lit) without income. Because psychoanalytic theory was the framework in viewing literature, it seemed a natural alternative to apply that theory to real people rather than to characters on the written page; and so, I applied to graduate school in clinical psychology.  It was then that I vowed to write a novel at some future time.  And that opportunity announced itself when I began to plan for my retirement from my clinical practice.  I had no idea of what I would write until I sat down at my computer, placed my fingers on the keyboard, and wrote: “Henya Chanah is a woman who no longer bleeds, so she puzzles over how this could have happened.  Try as she might, she can’t remember the last time she and Mendel were together. We must have been, she thinks, otherwise how could this be?” I knew then that my novel would be a fictional account, very loosely based on my mother’s experience, of immigrating from a shtetl on the outskirts of Odessa to America.

Q: Is there any truth to your story that is personal to you?

As with most immigrants, my mother was loath to recount, or to remember, any aspect of, what I now realize, was the trauma of her life in Russia.  Some of the characters in my novel are based on my mother’s character traits and those of and her brothers and sister, and on what I, as an eight-year old child, recall of my maternal grandparents.  Although the incidents and dialogue of my characters are made-up, it rings true to my memory of their personalities. There are two characters, however, who are completely my invention, as is the final section of the book: Bessie, the young woman who befriends Henya while sailing to America, and Mendel’s rejected brother, Shimshon.  But as with all the characters in Odessa, Odessa, they contain features — both good and bad — of its author: me.

Q: Do you have a favorite character? Why?

This is a challenging question to answer, Annie.  As each character evolved, for example, Henya in the first chapter, I fell madly in love with her.  I treasured her because of her valiant struggle to do what was required, despite realistic fears. She represents the struggle and resilience that many women have had, and still encounter, to take on tasks thrust upon them that had been previously denied. And similarly, when I wrote the chapter about Marya, the product of Henya’s bewilderment in that very first sentence of the novel, I was totally love-struck.  But from my present vantage point, having given birth to Odessa, Odessa well over a year ago, I confess to favoring Shimshon, the character invented wholly from my fancy. You ask why?  Shimshon audaciously stood up for what he believed in spite of its very serious consequences: loss of tradition, of family, of the life and loss of his mother tongue. He wasn’t perfect — far from it — and was plagued with guilt for the remainder of his life. But, significantly, he took responsibility for his wrongdoings.  At this junction in our history, we need a man, such as Shimshon, to stand up to the immoral and corrupt forces we presently encounter.

Q: How long did it take you to write “Odessa, Odessa”?

I began to write Odessa, Odessa about seven years ago. At that time, I was also totally involved in conducting my psychoanalytic clinical practice, which left time for me to write in the evenings and on weekends. At times, it was difficult to pick up where I left off but I made a habit of ending my writing session with the beginning of next sentence so that when I returned I could pick up where I left off.  Sometimes that worked and sometimes not.  When I retired four years ago, I had a complete draft of the novel which then required editing.  I was fortunate to find an awesome editor to help with that process.

Q:  As you geared up for your Book being released, what was the most exciting part(s) for you?

Nothing can compare to my delight when I first opened the cardboard box containing my Advanced Readers Copies (ARCs) of Odessa, Odessa. To hold a real, live book in my hands for the very first time, was a surreal moment.  The flowers from my publisher, She Writes Press, arrived at the same time to make it a celebratory occasion.

Annie: I can only imagine the joy of opening that box and holding your very first book!

Q:  With this being your first novel, do you think you will always explore historical fiction?

I love, love, love reading historical fiction.  Not only do I get to experience good writing, but I also get to learn much of which I wasn’t previously aware. I learn about other civilizations, customs, societies, and events and that is exactly what occurred when writing Odessa, Odessa. In addition to reading authors that wrote about the same period in which I was writing, like Mary Antin (The Promised Land), Michael Gold (Jews Without Money), and Henry Roth (Call It Sleep), to name but a few, I learned of historical events and significant people through my extensive research. For example, “the Khmelnytsky Uprising in 1648, when Jews were murdered and kicked out of the Ukraine…” (p. 25), or the “Edict of Expulsion and the banishment in 1886 of Kiev’s Jews…” or the “1881 pogroms in Elizavetgrad, Kiev and Odessa.” All was new to me.  And disturbing. So, yes, I can’t imagine writing anything other than historical fiction, but then I’ve also learned never to say never.  That is what’s so exciting about being an author.

Q:  May I ask who your favorite authors are?

That’s an almost impossible question to answer, but I’ll give it a shot.  Charles Dickens (A Tale of Two Cities); George Eliot (Middlemarch); Virginia Woolf (To the Lighthouse).  Umberto Eco (The Name of the Rose); Robert Graves (I, Claudius); Anthony Doerr (All the Light We Cannot See); Helene Wecker (The Golem and the Ginni); George Saunders (Lincoln in the Bardo); Toni Morrison (Beloved); Markus Zusak (The Book Thief); Sharon Kay Penman (For all of her historical fiction novels about kings & queens).   Well, I could go on, but I’ll leave it at that.

Well, you get my point.

Annie: haha! Amazing books! I could see how the list could go on and on!

Q:  What is your favorite part of being a published author? 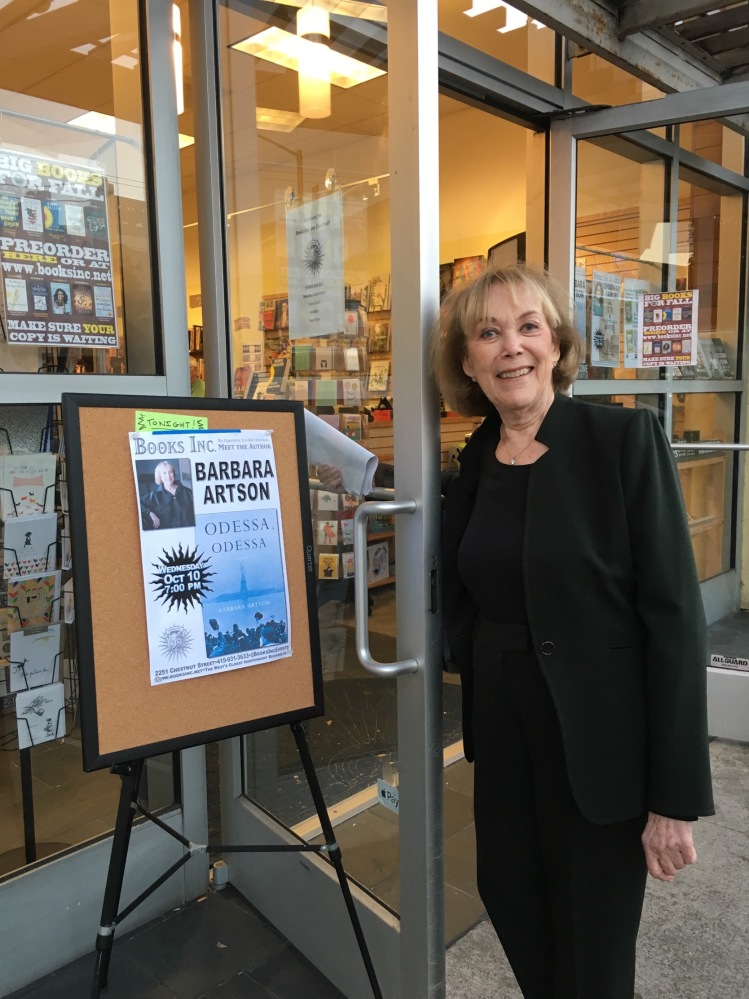 ….The scariest?
My launch at Books, Inc. in San Francisco.

Q:  Do you have another book on the horizon?

Not exactly, but several of my readers and friends have suggested writing a sequel to Odessa, Odessa beginning with the next generation and tying together, and filling in the strands of the generation that comes after Roberta and Hannah, Dora’s daughters.  At the moment, I’m giving myself some space to recuperate from a year of living on the edge.  But I also look forward to the time when next I put my fingers on the keyboard with the humbling possibility of discovering my next creation.

Q: Lastly, Do you prefer Print Book or eBook?

Both.  In the evening when I read in bed, it’s eBook time for me.  At all other times, the feel of the paper, the image of the written word, the heft of the book, that’s me all over!

Annie: Thank you Barbara for the fun and informative interview! It was great getting to know more about you and your debut novel, “Odessa, Odessa”.

To be entered leave a comment by Sunday at 9pm. Thank you.