Nobody would blame widowed doctoral student Eliza James for giving up on Happily Ever After; at twenty-nine, she’s suffered more loss than most people do in a lifetime. But Eliza’s convinced her own hero is still out there, waiting for her, just like in the beloved romance novels she devours. Every girl deserves a Darcy, right?

Only Eliza doesn’t dream of a modern-day affair: she wants the whole Regency experience. When a magical manuscript thrusts her back two hundred years into the arms and life of one Deveric Mattersley, Duke of Claremont, however, Eliza soon realizes some fantasies aren’t all they’re cracked up to be, especially when her duke proves himself less than a Prince Charming.

Deveric Mattersley has no interest in women, much less marriage. Determined to atone for his sins after convincing himself he’s at fault for the death of his first wife, he decrees himself content to focus on running his family’s estates, and on raising his son–until the mysterious Mrs. James appears. Who is she? What does she want? And why does she make Dev’s blood run hot in a way no woman ever has?

Can a man with a past and a woman from the future forge a love for all time?

—
“I fell in love with this book, just as I did with the Jane Austen classics. There’s a new Mr. Darcy in town.” – Annie, ARC reader, reviewer for The Write Review and ChickLitPlus.com. 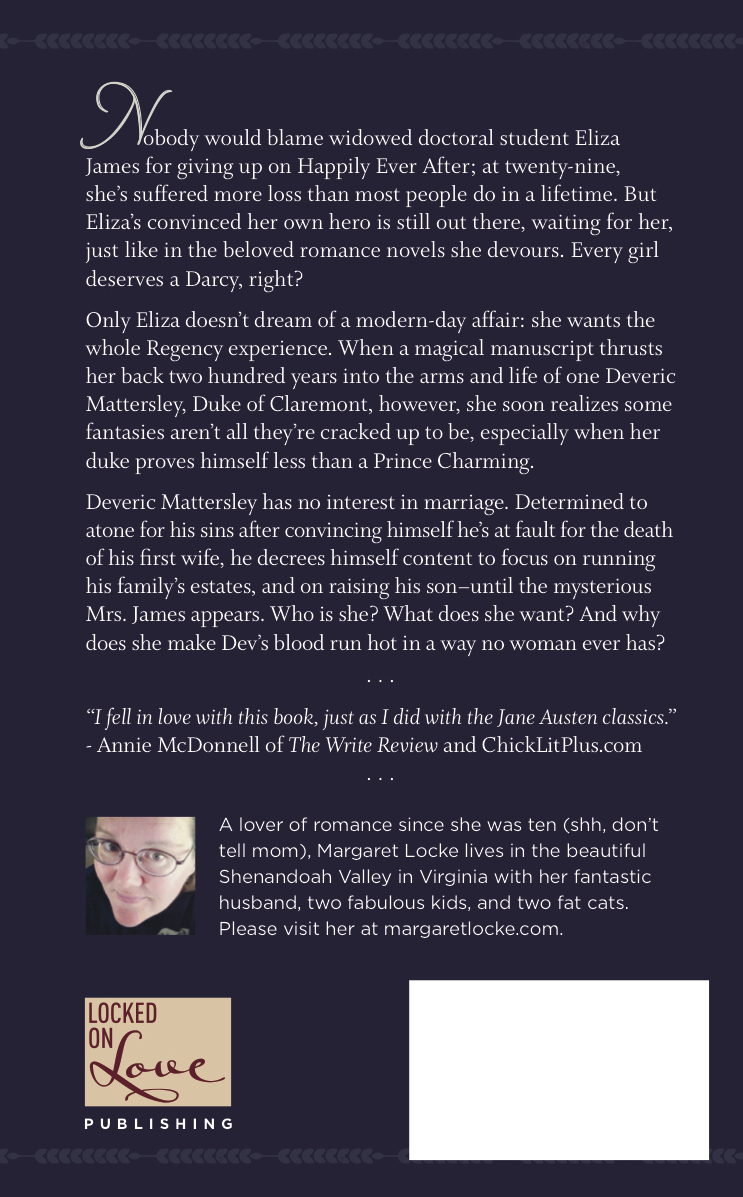 I fell in deep love with the first book in this series; called “A Man of Character”, so the anticipation of this release was exciting to say the least. Margaret Locke quickly went on to my list of favorite authors to follow!!!

This book can be a stand-alone read, but I have to say that you should not miss out on “A Man of Character” because it is such a wonderful story. Her new book, does not disappoint, either.

This is not your typical love story. Margaret Locke is a true gift to romance lovers everywhere. This is a magical romp not to be missed.

In her book, “A Matter of Time”, she takes us to England in the year 1812, right in the middle of what we call the Regency Period. In the present day, 2011, Eliza has always dreamed of meeting her “Duke” and living a life like a character in one of Jane Austen’s books. So, when a magical manuscript shows up in the hands of her best friend, Cat…what more could Eliza wish for.

Eliza is thrust back two hundred years, and she enters the lives of the Mattersley family like a tornado!! Is Deveric Mattersley, her Mr. Darcy? Either way, there is certainly a new Mr. Darcy in town. He is the Duke of Claremont, after all…her dream man! Right? Or, maybe this is not really her dream?

Watching her integrate in to this new lifestyle was very entertaining. Margaret Locke really did her research on this time period, because I really felt like I was back there. Seeing her struggles were real…like not using the proper words or etiquette.

Once again, Margaret Locke took me on a journey that I enjoyed thoroughly. Her characters are awesome, and you will find yourself invested in them. You will be disappointed when the book ends, wondering when her next one will be released.

I am TEAM ELIZA!!

We are The Write Review....Where Book Reviews are of utmost importance. Right now we are Two Girls Reading as many books (audiobooks) as we can to share with you! Annie McDonnell is the Founder Of TWR; where she also interviews authors Live with Carly Rae on the show “2 Girls 2 Reviews”! Serena Soape is an Associate Reviewer. We also proudly have a Book Club as a Sister Group to TWR on Facebook. We are for Joyful Bibliophiles and Lovers Of Stories! We are here to share this joy with you. Thanks for browsing! Enjoy! View all posts by McHorsky