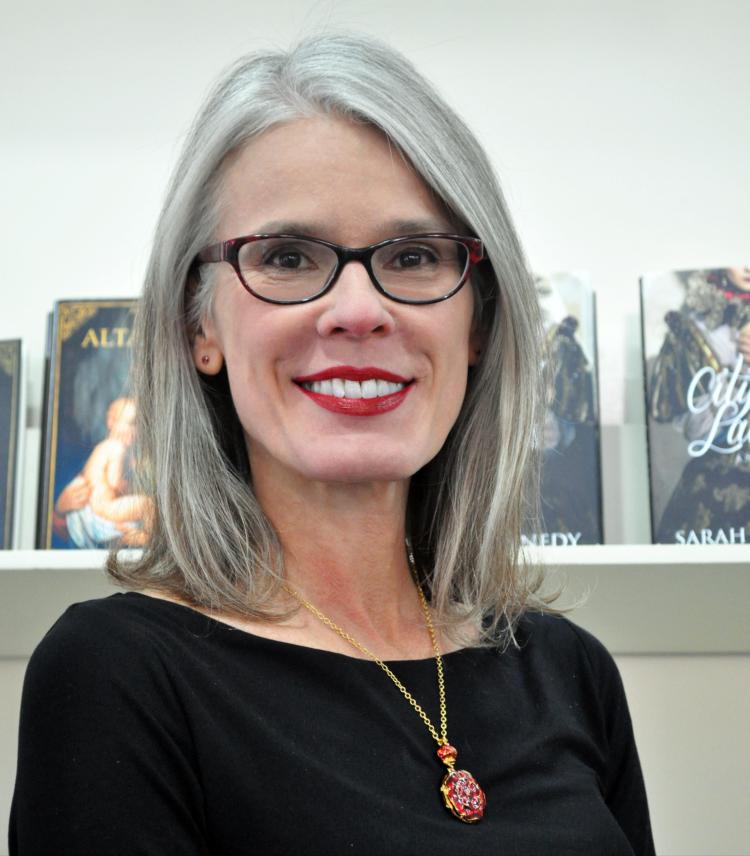 COMMENT BELOW TO WIN A COPY OF HER FIRST NOVEL, THE ALTERPIECE (US ONLY)

Q:  When did you realize you were a novelist?

A:  The realization crept up on me gradually.  I used to consider myself a poet only, but when I got to my third book, the poems became less lyrical and more narrative . . . and they got longer-lined.  At some point in my forties, I hit the right-hand margin, and one evening in a bookstore with my husband it came to me:  I’m going to write a novel!

Q:  As you geared up for your Book Release of your books, what was the most exciting part(s) for you?

A:  Seeing the hard copy for the first time, definitely!  It’s always exciting to see the cover, too, of course, but there’s nothing like opening the cardboard box and seeing the actual books in there.  I’m usually almost too excited to lift one out!

Q:  I am so excited to read, “The Cross and The Crown Series”, what first sparked this interest for you?

A:  Well, it was actually a research project for poems that got me thinking about the story of a young former nun under Henry VIII.  I’ve been interested in English women’s history for a long time, and as a Renaissance scholar (and frequent traveler to the UK and Ireland) I’ve walked through many a religious ruin.  I had done a lot of reading about the European witch trials and about early female mystics and other church women who were well-known.   It occurred to me as I was reading, though, that there were no stories about what happened to the ordinary women in the convents after Henry VIII closed them and seized the properties, so I felt a strong urge to create a history for these lost women.

Q:  You have several books, including poetry. What is that your favorite topic to explore?

A:  Oh, wow, that’s a hard one!  I have an abiding interest in the lives of ordinary women from all periods.  I guess I’m particularly interested in how women cope during times of great upheaval—wars, changes in government, changes in religious belief.  Women kept families together and often had to do much of the behind-the-scenes work (like making sure that food was available and clothing was washed) that made life go on—for everyone.

Q:  Tell us more about how you learned so much about the lives that were lived in the 1500’s in Tudor England?

A:  I love to read odd sorts of “literature,” like letters, diaries, and manuscripts that people left, like recipe (or “receipt”) collections.  You can get interesting tidbits about how people really lived from them.  I also like to go to out-of-the-way sites, like ruined old castles and houses that almost nobody visits, to see the layout of the buildings.  You can definitely tell quite a lot about how people lived from seeing where they put their kitchens and sickrooms and libraries.  People often don’t think about how ordinary folks did things like wash their linens (you had to make the soap first!) and dispose of bodily waste (put the toilet near a sluice that can run to a river . . . but don’t put it upstream from your drinking water source!).

Q:  Is there any truth to what you write about?

A:  Yes, there’s quite a lot of truth to the way people dressed, spoke, behaved, and misbehaved.  I try to use documented types of medical procedures and keep true to historical events and persons.  I also try to create characters who are true to the belief systems of the day, without making cardboard figures.  For example, many nuns were quite devout . . . but many of them weren’t and got carried away by ambition, lust, or greed.  I want my characters to be fully human (which includes flaws, alas!) without making them modern humans.

Q:  Is there an author that you feel resonates with you and your writing style?

A:  That’s another difficult one!  I’m not sure I know what my style is!  I know that I like knotty characters and plausible plots.  I get impatient when characters are too good (or too evil, for that matter).  I want characters to make mistakes and figure out how to fix or atone for them.  I just finished reading a long novel, Sweet Caress by William Boyd.  There’s really not a plot to this novel, but there is a leisurely unfolding of character.  There’s no big central crime; the character moves through history to the end of the book.  I loved this novel for its description and close attention to character.  At the same time, I love good crime fiction like that of Benjamin Black (aka John Banville) that’s fast-paced without losing sight of character.

Q: When do you typically write?  Where do you write?  Set this up for us…

A:  When I started writing fiction, I changed from a daytime writer to an evening writer.  I used to write poems in fits and starts, in several short sessions per day.  Now, I write in longer stints, after dinner.  I think I need the daytime hours to let my subconscious work on the manuscript, and when I sit down I need a few hours of uninterrupted time at my desk.  Of course, I sometimes have to pace around some during those hours!

Q:  May I ask who your favorite authors are?  Books?

A:  I’m not sure I have a favorite!  I love Tana French, Morag Joss, and Ian Rankin for crime fiction, and I think Hilary Mantel is great (though I don’t agree with her assessment of Thomas Cromwell’s character!).  I think Charles Frazier is wonderful, and I look forward to anything Lee Smith publishes.  Because I’m a teacher, I get to revisit the classics frequently, too, and I never tire of teaching Thomas Wyatt, Shakespeare, John Donne, and Isabella Whitney.

Q:  What is your favorite part of being an author?

A:  The freedom to disappear into my own world!  I’m quite solitary by nature, but my head is always full of people talking.  Being an author lets me talk back to them without appearing nutty to the “real” people around me.

Q:  When can we expect your next book?  Do you want to tell us a little bit about it?

A:  I hope the next installment of The Cross and Crown will be out next year.  This one moves forward in time several years and takes place during the first year of Mary Tudor’s reign.  It’s tentatively titled Queen of Blood—but I promise that it does not feature any vampires.

For me?  Book, hands down.  There’s nothing better, in my opinion, than stretching out in a comfy chair with a physical book in my hands.  I like the feel of paper and the smell of print.  I want to run my hand over the cover and rub the pages between my fingers.  Yeah, it’s book for me.  And a cup of coffee and my dog.