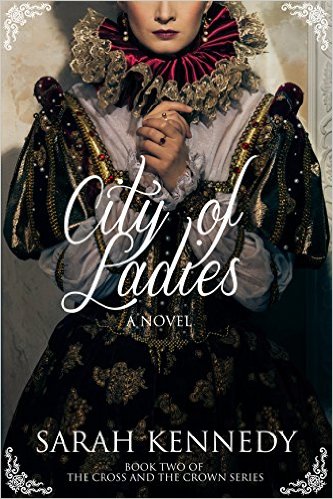 It’s midwinter in 1539, and former nun, Catherine Havens Overton, has just given birth to her second child, a daughter. The convent in which she was raised is now part of her husband’s lands, lands that once belonged to Catherine’s family. With a son, Robert, and her new daughter, Veronica, her life as the mistress of a great household should be complete. But Henry VIII’s England has not been kind to many of the evicted members of religious houses. And in order to protect her old companions from the hostilities, Catherine has gathered about her a group of former nuns in hopes of providing them a chance to serve in the village of Havenston, her City of Ladies. Catherine’s past haunts her. Her husband begins to suspect that Robert is not his child. Then the women of Overton House begin to disappear and one of them is found brutally murdered nearby. Seizing the moment, under the pretense of ensuring her safety, William forces Catherine to enter service at Hatfield House where the young Elizabeth Tudor lives. Reluctantly, Catherine obeys, only to find herself serving not only the Protestant Elizabeth but also the shamed Catholic Mary Tudor. As the murders in Yorkshire continue to mount and her loyalty to the Tudor sisters grows more complicated, Catherine must uncover the secret of the killer and save her City of Ladies.

I loved this cover. It looks fabulous on my book shelf.

This was my second book by Sarah Kennedy, and it is book two in the “Cross and The Crown” Series. When I finished I was looking forward to getting to the third book. This is a series that I will never forget and they stand out as originals, as I never read books about this time in history. Sarah Kennedy writes such knowledge of historical facts that you feel like she was right there, walking among the women.

The book “City of Ladies”, is about the women from her first book. It is 1539, and Catherine Havens Overton gathers the women that she lived with in the Convent with her when they were removed by the king’s men. She has them all working at the Overton House, to have them remain together.

But, the women start disappearing. They are being murdered. Catherine is determined to find the killer and save the women in her “City of Ladies”

This book is an amazing tale of mystery and intrigue. You will be spellbound.

One thought on “#BookReview: “City of Ladies” by Sarah Kennedy”