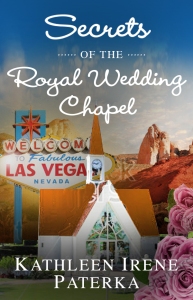 Join us Friday for Kathleen’s Interview and Giveaway.

Immersed in the world of weddings and romance, Lily Lavender grew up believing in brides, grooms and happily-ever-afters. A direct descendent of the British royals, it seemed her destiny and royal birthright to someday assume a position as wedding coordinator in their family-owned wedding chapel business. But when her mother Mimi’s third marriage eventually fails, Lily’s dreams of her own happily-ever-after quickly fade. She’s no longer interested in a life of assisting brides walk down the aisle into a life of disillusionment and possible divorce. Lily turns her back on The Royal Wedding Chapel and leaves Las Vegas to fashion a life of her own.

Years later, Lily—now a single mom—discovers her teenage daughter has run off to Las Vegas, lured by Mimi to help run the chapel. Determined to save her daughter from the broken dreams of Sin City and the nonsensical world of which family fairy tales are made, Lily returns to Las Vegas. But nothing prepares Lily for the royal drama which awaits her… or the sins and secrets she stumbles across that threaten to close the chapel and ruin her family forever.